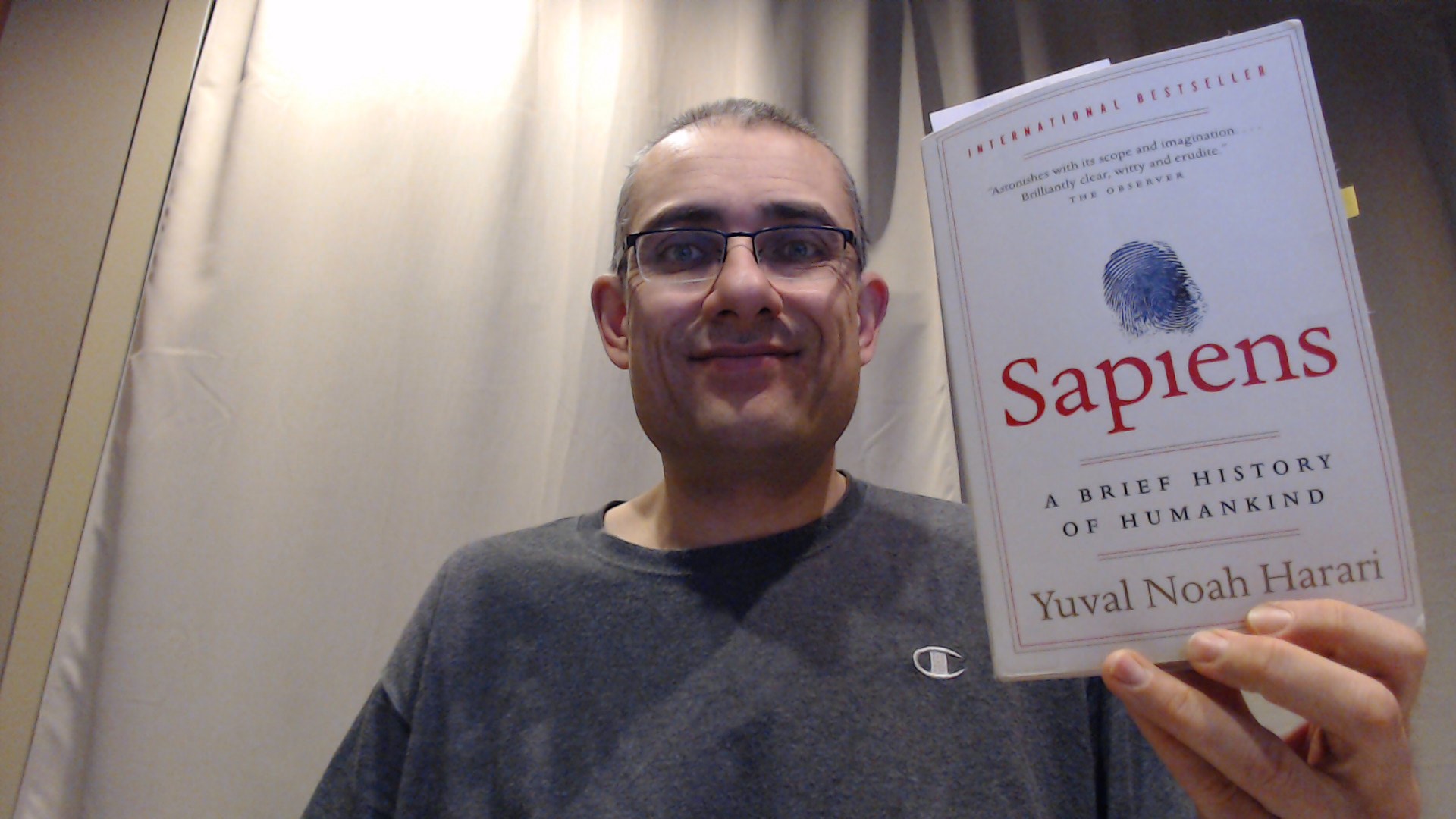 I just finished reading Sapiens: A Brief history of Humankind by Yuval Noah Harari. I do not profess to be a history buff or anything but it was one of those books that kept being referred so I thought I should read it. Why is a Health and Wellness Coach posting about a History book on his blog? Well there is a portion of the book dedicated to early humans and their diet and how it all changed over time especially with the Agricultural Revolution. That is the connection I am making to Health and Wellness, but this is not a Paleo promoting book or anything of the sort.

Some brief thoughts below on why I just enjoyed this book:

Sapiens is a very ambitious book; it takes a very broad approach, condensing huge topics into short chapters in an attempt to provide a basis for the development of our entire species. It tackles the biggest questions of history and of the modern world. Why are we here? Why are we the way we are? What does our happiness mean? Harari writes with use of metaphor, providing answers that seem intuitively right but leading us to think further than we have before. The links between giant forces that control our world such as capitalism, science, and empire are made and very thought provoking for me.

It covers all aspects; evolution, anthropology, geography, psychology, religion, ideologies, and the future of humans. I thought that Harari makes the book interesting with his unique points of view.

An example, Harari mentions that chimps and sapiens (humans) can only organize in groups of up to 150, without organizing into a hierarchical structure. So, how did cities grow to their enormous size? Through fiction. That’s right, through fiction, through beliefs in common myths. These are myths about ideologies. These imaginary fictions include human rights, nations, and currency; they work because many people cooperatively believe in them.

Another example he describes is the disappearance of many animal species in certain habitats that are coincidental in time with the arrival of humans. For example, Australia lost 23 of 24 large animal species at about the same time that humans migrated there. Many other islands were also rich in large mammals until humans arrived.

The author discusses the agricultural revolution in some detail. He addresses the question why agriculture became important in the Middle East, Central America, and China, but did not become popular in Australia, Alaska, or South Africa. He explains that most plants and animals cannot be domesticated, and that regions where there is a deficit in plants and animals that could be domesticated, they did not develop agriculture.

He claims that hunter gatherers, who roamed the lands and did not stick to one location like agriculturists, were more stimulated, less in danger of starvation and disease. Their diets were more varied. Agriculture increased the volume of food, but not better quality of food, and did not yield more leisure-time. Agriculture created population explosions and pampered elites. In fact, Harari claims that the agricultural revolution is “history’s biggest fraud.” The culprits of this fraud were wheat, rice, and potatoes, all plants that domesticated humans! Also, farming encouraged warfare, because it forced people to fight to protect territory. And agriculture, because it developed over millennia (not overnight), created consequences gradually. People could not anticipate the full consequences of their decisions. More wheat helped to lead to more children, and less food for each.

Another area the author delves into is since the French Revolution, political history is a series of attempts to reconcile liberty, which involves individual freedom and equality. In order to understand another culture, one should look at the “Catch 22’s”, that is, look where rules and standards contradict each other. These contradictions are part of culture. For example, in Medieval Europe, there was a clash between Christianity and chivalry. In modern Western civilization, there are clashes between equality and liberty.

I am just scratching the surface of what is in this book in this post. I think most people will find some thought provoking nuggets in here and that is why I wanted to share.