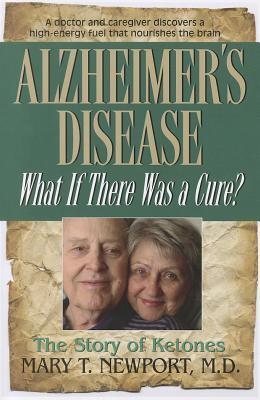 I have been meaning to read this book by Dr. Mary Newport for sometime. I have heard her speak a few times on various podcasts and was intrigued by her and her husband Steve’s story. I am glad that I have now read her book and would like to share my thoughts on it. First some statistics. By the time someone is 85 years old, there is a 50/50 chance of having some level of dementia. Alzheimer’s is often referred to as Type 3 Diabetes. If a person has Type 2 Diabetes, they are four times as likely to develop Alzheimer’s. Not only is there Type 2 Diabetes and Dementia in my family, but I also plan to live until I am at least 100 years old. I have also genetically tested for the slightest increase over the general population in probability of developing Alzheimer’s. Needless to say this topic is very much one I am interested in.

There are five main sections to this book and I will provide a few brief comments on each.

Steve was a creative Mr. Fix it type of guy, who would tinker with things and get them back in working order. While there may have been some inclinations earlier in life, at the young age of 51 the symptoms of Alzheimer’s became pronounced for Steve. Forgetting appointments, mistakes in calculations, misplacing things, becoming anxious, getting lost and the onset of depression. His doctors started him on medications and within the next few years reading became difficult, his attention span and listening deteriorated, a loss of appetite or forgetting to eat led to weight loss. Another typical experience Steve had was a sudden craving for sugar. Studies show a greater propensity to crave sugar (fruit, sweets, alcohol) in people with Alzheimer’s and other neurodegenerative diseases. By the age of 58 he was starting to show signs of not being able to remember details about his children’s childhood and his test scores (Mini-Mental Status Exam and Clock Test) were falling. At this point Mary began to look at clinical trials to get Steve into. Around the same time she came across a study that was promoting the use of Ketones instead of glucose as an energy source for the brain in people with Alzheimer’s. The study showed that half of the participants showed improvement in tests when taking 20 grams (four teaspoons) per day of MCT (medium-chain triglycerides) oil. MCT oil is primarily found in Coconut Oil and Palm Oil. The Newport’s started adding Coconut Oil to Steve’s meals in any fashion that they could. Within three days a slight improvement was observed. Within a month, his scores on the standardized tests improved greatly.

The next section provides emails and letters from people who wrote to Dr. Newport about their use of Coconut Oil and MCT’s and the improvements they saw in dealing with Dementia, Alzheimer’s, Memory Loss, Peripheral Neuropathy, Parkinson’s, Posterior Cortical Atrophy, Glaucoma and Macular Degeneration, Seizures, Huntington’s, Amyotrophic lateral sclerosis (ALS), Generalized Dystonia and Reactive Hypoglycemia. A very compelling and interesting section of the book.

The third section of the book speaks to the science of what are the potential causes of Alzheimer’s. Some suggestions are toxic metals and chemicals, diet, alcohol, viruses, traumatic head injuries and medications to name a few. Also discussed are what are Ketones and Ketogenesis and how this can help prevent and slow the progression of Alzheimer’s. Overly simplified, ketones are a more efficient producer of ATP (energy) than glucose. If you are not familiar with some of the topics discussed, it may seem a little overwhelming at first, but I implore you to bear through it (re-read if need be) and truly get an understanding of the knowledge being shared.

This section of the book goes over how to transition your diet to eating more Coconut Oil/ MCT Oil. Coconut oil is a nice flavour enhancement to many foods and you can substitute coconut oil for butter, olive oil, margarine etc. or mix it into oatmeal or a smoothie. We cook a lot with coconut oil and I put it or MCT Oil into my coffee. It is an easy way I have my clients add some healthy fat into their diets. Also discussed is how this will effect saturated fat and cholesterol and the myths surrounding these. The role that cholesterol plays in dementia. And finally, why a proper diet (Fresh & Whole versus Packaged and Processed) makes all the difference to Alzheimer’s and other autoimmune diseases.

After getting this far through the book, the reader may still have lingering questions in their mind. Dr. Newport tries her best to answer many specific questions on Coconut Oil and MCT Oil. She even dedicates a few pages at the end for recipes to get the beginner started.

While there may not be enough Clinical research for some folks, there are none the less many studies on ketones and the numerous benefits it can have for the body. I think hundreds and hundreds of n=1 (a sample size of one being the individual) experiments showing success amounts to there being something there. If Alzheimer’s is a concern for you or a loved one, you owe it to yourself to read this book, think about the topics discussed and give Dr. Newport’s advice a try.